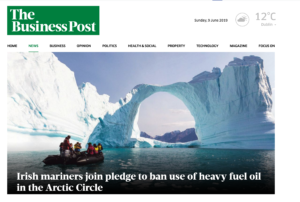 Speaking to The Sunday Business Post, the president of the Irish Institute of Master Mariners, Capt Paul Roche said: “I fully support the Arctic Commitment as it is so important to protect the pristine environment of the polar regions. ”Heavy fuel oil is a polluting ship fuel that accounts for 80 per cent of marine fuel used worldwide. Around 75 per cent of marine fuel currently carried in the Arctic is HFO and over half of this is by vessels flagged to non-Arctic states: countries that have little if any connection to the Arctic.Irishman Dave Walsh, communications adviser to the Clean Arctic Alliance, welcomed the IIMM pledge.“We thank the Irish Institute of Master Mariners for signing the Arctic Commitment, and for calling for a ban on the use and carriage of heavy fuel oil by Arctic shipping,” he said.“The IIMM join an illustrious list of signatories including scientists, writers, photographers, polar explorers, shipping companies, ports, politicians and NGOs who not only recognise the risk to the Arctic environment from increased ship traffic and the threat from HFO oil spills, but also understand that what happens in the Arctic doesn’t stay in the Arctic.”