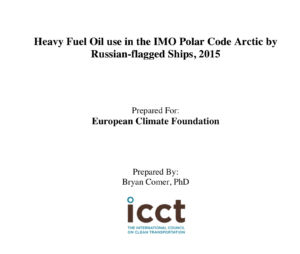 The use of heavy fuel oil (HFO) as a marine fuel poses serious environmental and economic risks, especially in ecologically sensitive areas like the Arctic. Using HFO is risky not only because of potential fuel oil spills but also because burning it produces harmful air and climate pollutants, including black carbon (BC). As ship traffic increases in the Arctic, the risk to the Arctic environment and its peoples will also increase.

The International Council on Clean Transportation (ICCT) has been investigating the use of HFO in the Arctic and the BC emissions that result from it for several years. In 2017, the ICCT published a report titled Prevalence of Heavy Fuel Oil and Black Carbon in Arctic Shipping, 2015 to 20251 which showed that while less than half of the number of ships in Arctic waters operated on HFO, HFO represented 76% of fuel onboard because larger ships (with larger fuel tanks) tend to use HFO. The Clean Arctic Alliance, a coalition of environmental non- governmental organizations, has used this and other research findings to advocate for an end to the use of HFO in the Arctic. At the request of IMO Member States, the IMO has agreed to develop a ban on the use and carriage for use of HFO in the Polar Code Arctic. A ban could be in place as early as 2021.

Ships that operate in the Arctic fly many flags – 65 different flags in 2015. However, Russian- flagged ships dominate Arctic shipping activity. Russia has the longest Arctic coastline and has invested heavily in Arctic ports and infrastructure, so it will come as no surprise that most of the ships operating in the Arctic are Russian-flagged and that these ships use and carry large amounts of fuel, including HFO. This briefing paper analyzes the use and carriage of HFO as fuel by Russian-flagged ships operating in Arctic waters in 2015. We use the IMO’s definition of the Arctic as found in IMO’s Polar Code.