Skip to content
Home
Press releases
MEPC 73: Briefing On Ban on Use and Carriage of Heavy Fuel Oil by Arctic Shipping

MEPC 73: Briefing On Ban on Use and Carriage of Heavy Fuel Oil by Arctic Shipping 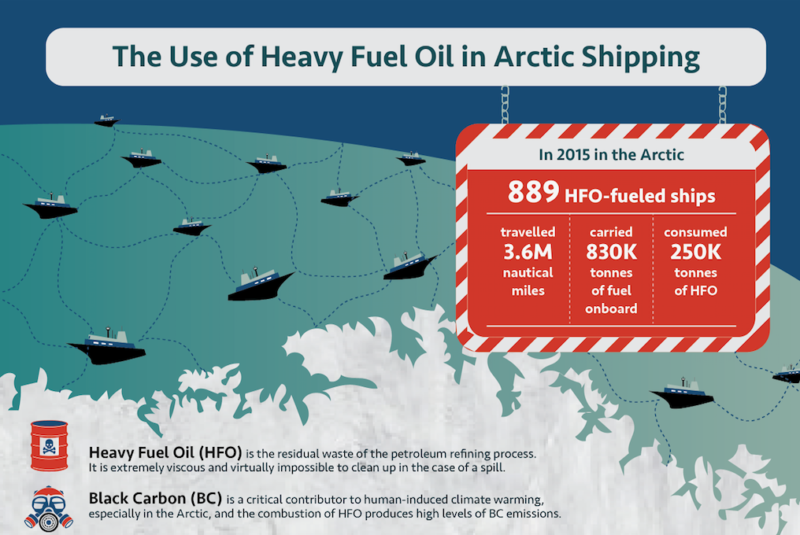 What: Progress towards a ban on heavy fuel oil as ship fuel in the Arctic

In July 2017, the International Maritime Organization’s Marine Environment Protection Committee (MEPC 71), agreed to embark on a body of work aimed at mitigating the risks of heavy fuel oil (HFO). This move was welcomed by the Clean Arctic Alliance, a coalition of non-governmental organisations calling for a ban on the use and carriage of HFO as fuel in the Arctic – as the simplest and most effective way to mitigate its effects.

In April 2018, at MEPC 72, eight IMO Members came forward with a proposal to ban HFO use and carriage as fuel by ships operating in the Arctic. The proposal was supported by over 20 countries during discussions at the IMO, though for some it was contingent on the outcome of an assessment of the impacts of the ban. Although the proposal for a ban was well supported, not all Arctic countries are on board as yet – in particular Canada and Russia appear to prefer to trial other measures first.

At MEPC 73, member states have been tasked with considering impact assessment methodology ahead of the Scope of Work, including the development of a HFO ban, being sent to PPR 6 in February 2019.

“A single HFO spill could have devastating and lasting effects on fragile Arctic marine and coastal environments,” the Finnish proposal said. “In addition, Arctic shipping is projected to continue to rise, thus increasing the risk of a spill. For these reasons, the ban on HFO should be implemented as soon as possible, and any delay in implementation of the HFO ban by eligible ships should be short-lived.”

What to expect from MEPC 73:

The Clean Arctic Alliance is calling for IMO member states to:

A decade after the Arctic Council published the Arctic Marine Shipping Assessment (AMSA), which identified that an oil spill is the greatest threat to the Arctic from shipping, IMO member states must now commence the work necessary to adopt a ban on the use and carriage of heavy fuel oil (HFO) by ships operating in the Arctic.

Will there be a vote on the HFO ban? No – that’s not how the IMO works. At MEPC 72 in April, many IMO Member States showed their support for a HFO ban, which led to agreement on starting to  work on developing the ban. It is essential that these supportive countries stay the course, and to ensure that a regulation to ban the use and carriage of HFO as fuel should be developed for approval in 2020, and adoption in 2021.

At MEPC 72, “a strongly-worded proposal to ban HFO as shipping fuel from Arctic waters was co-sponsored by Finland, Germany, Iceland, Netherlands, New Zealand, Norway, Sweden and the US. The proposal for a ban, along with a proposal to assess the impact of such a ban on Arctic communities from Canada, was supported by Australia, Belgium, Czech Republic, Denmark, Estonia, France, Ireland, Japan, the League of Arab States, Poland, Portugal, Spain, Switzerland, and the UK. Support from Denmark is particularly notable as it is the sixth Arctic nation to support the ban”  and recently Greenland announced its support for an HFO ban in the Arctic. Earlier in July, the Inuit of Alaska, Canada, Greenland and Chukotka added further weight to the calls to end the use of HFO in the Arctic in the Utqiagvik Declaration (page 4).

The EU has continued to offer support for a HFO ban. On Friday October 19, speaking at the Arctic Circle conference in Iceland, EU Commissioner Karmenu Vella said that “reducing black carbon emissions in the Arctic remains high on our list of priorities. And after the entry into force of the Polar Code last year, we are now pushing for international standards for ships using and/or carrying Heavy Fuel Oil.”

Russia, Canada and Denmark have all supported IMO work to consider ways to mitigate the risks associated with HFO, however, to date, Russia has not supported a ban on use of HFO in the Arctic. While this appears to be still the case, the Clean Arctic Alliance notes that a Russian state-owned shipping company Sovcomflot is speaking openly about the need to move away from oil-based fuels, and marine bunker fuel supplier Gazpromneft expects to halt fuel oil use from 2025. Significantly, in August 2018, Russian President Vladimir Putin and Finnish President Sauli Niinisto made a joint statement on the need to move to cleaner ships’ fuels such as LNG in the Arctic.

Canada has previously supported a “phase down” on HFO in a joint Trudeau/Obama announcement in December 2016, and proposed work to mitigate the risks of HFO at MEPC 71 in 2017, however this position appears to have changed, and for now remains unclear. In a Canadian Press story published on April 5th 2018, Canada not on board plan to ban ‘dirty fuel’ use on Arctic shipping routes, Andrew Dumbrille of WWF, a Clean Arctic Alliance member, criticises Canada for ‘“sitting on their hands”’.

The article says that “Canada, however, wants a delay. It joined the Marshall Islands — one of the most popular places in the world for shipping companies to register their vessels — to submit a request for things to be slowed down until further study on the economic and other impacts of such a ban on Arctic communities can be completed.”

“Dumbrille said 2021 is three years away — plenty of time to develop a plan to get rid of “the dirtiest, the cheapest, the bottom of the barrel fuel on the planet” without placing a burden on northern communities”

What should I read to understand more?

See also: Six briefing papers on the use of heavy fuel oil in the Arctic, prepared by Bryan Comer PhD, The International Council on Clean Transportation (ICCT), for the Clean Arctic Alliance. These papers look at HFO use by flag state, by ship type, by shipowner, and looks in more depth at HFO use by cruise ships and by fishing vessels in the IMO Polar Code Arctic, 2015, and use by of HFO by Russian vessels in the Arctic.

Photo exhibition: The Arctic – On Our Watch

The Arctic – On Our Watch, a photography exhibition organised by the Clean Arctic Alliance, will be held at the International Maritime Organization’s MEPC 73 meeting, 22 – 26 October 2018

This collection of images from 25 photographers forms visual journey around the Arctic.

The images were put forward by both amateur and professional photographers to show that this seemingly remote and inaccessible region is home to uniquely adapted communities and iconic wildlife. They also reflect the Arctic as it is today and how it is changing, and how important it is to the work at the International Maritime Organization (IMO) and decisions that the delegates will make this week.

The IMO’s work, to address the risks associated with the use of heavy fuel oil (HFO) – the dirtiest of marine fuels, to agree on black carbon and greenhouse gas emission reduction measures, to deliver a mandatory code for international shipping operating in the Arctic waters, is a critical contribution to securing the future of the Arctic.

Lunchtime side event: Impacts and Benefits of a Heavy Fuel Oil Ban in the Arctic

Join us this Tuesday, Oct 23, for a lunchtime event that will discuss economic and community benefits and impacts of a HFO ban in the Arctic.

The panel will present an Indigenous community perspective on a HFO ban as well as recent research findings on:

Organised by WWF (member of the Clean Arctic Alliance)

(Challenges and opportunities of maritime transport decarbonisation: The initial GHG Strategy and HFO ban in the Arctic)

This event will be held in Spanish with no translation available.

by Polar Research and Policy Initiative & Friends of the Earth US

The Attlee Room, House of Lords

‘Indigenous Perspectives on Polar North Shipping and a Ban on Heavy Fuel Oil (HFO) in the Arctic’, followed by a reception, in Westminster on 24 October 2018. This event will be held from 6.30 pm to 9 pm in the Attlee Room in the House of Lords and will be convened in the margins of the 73rd Session of the IMO Marine Environment Protection Committee (MEPC 73).

More details of this event  – including registration.

Heavy fuel oil is a dirty and polluting fossil fuel that powers ships throughout our seas and oceans – accounting for 80% of marine fuel used worldwide. Around 75% of marine fuel currently carried in the Arctic is HFO; over half by vessels flagged to non-Arctic states – countries that have little if any connection to the Arctic.

The Arctic is under pressure – climate change is fuelling temperature rises double the rate of further south. As sea ice melts and opens up Arctic waters further, even larger non-Arctic state-flagged vessels running on HFO are likely to divert to Arctic waters in search of shorter journey times. This, combined with an increase in Arctic state-flagged vessels targeting previously non-accessible resources, will greatly increase the risks of HFO spills.

Already banned in Antarctic waters, if HFO is spilled in cold polar waters, it breaks down slowly, proving almost impossible to clean up. A HFO spill would have long-term devastating effects on Arctic indigenous communities, livelihoods and the marine ecosystems they depend upon. HFO is also a greater source of harmful emissions of air pollutants, such as sulphur oxide, and particulate matter, including black carbon, than alternative fuels such as distillate fuel and liquefied natural gas (LNG). When emitted and deposited on Arctic snow or ice, the climate warming effect of black carbon is up to five times more than when emitted at lower latitudes, such as in the tropics (see infographic: Responding to Arctic Shipping Oil Spills: Risks and Challenges).

More than 125 shipping companies, cruise operators, ports, businesses, explorers, non-governmental organizations and politicians have put their name to the Arctic Commitment, an ambitious civil society initiative calling for ban on heavy fuel oil (HFO) from Arctic shipping, since its launch in Tromsø in January 2017.

Conceived by the Clean Arctic Alliance and expedition cruise ship operator Hurtigruten, the Arctic Commitment aims to protect Arctic communities and ecosystems from the

risks posed by the use of heavy fuel oil, and calls on the International Maritime Organization (IMO) to ban its use and carriage as fuel by Arctic shipping.

The following not-for-profit organisations form the Clean Arctic Alliance, which is committed to achieving the phase out of HFO as marine fuel in the Arctic:

Contact regarding any of the above activities:Dave Walsh, Communications Advisor, HFO-Free Arctic Campaign, [email protected], +34 691 826 764