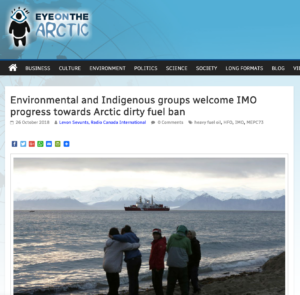 Environmental and Indigenous groups hailed Friday progress made by the world maritime body towards developing a ban on the use and carriage of the highly polluting heavy fuel oil in Arctic waters.

As the International Maritime Organization’s Marine Environment Protection Committee’s (MEPC 73) meeting concluded in London, several member states of the United Nations’ specialized agency supported a move to have a technical subcommittee of the IMO begin work on measures to mitigate risks of using and carrying heavy fuel oil in Arctic waters, including an eventual ban.

At Canada’s insistence, MEPC73 also discussed methodology of assessing impacts of the potential ban on Indigenous and northern communities as well as industry before referring the matter to the Pollution Prevention and Response subcommittee (PPR6), for its next meeting in February 2019.

Sian Prior, lead advisor to the Clean Arctic Alliance, a coalition of 18 NGOs, said they are pleased with progress made at MEPC this week and that work to develop a ban on use and carriage of heavy fuel oil by ships in Arctic waters will now commence early in 2019.

“It is important that this work is concluded swiftly, so that the ban can be adopted in 2021, and phased in by 2023,” she said. “We look forward to considering information from Arctic countries including Canada, United States, Greenland (Denmark), and Russia, on the potential social, economic and environmental impacts of a ban.”