Kjarninn: “Difficult divide in the Arctic Council if one discusses climate change” 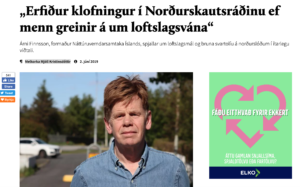 Kjarninn: “Difficult divide in the Arctic Council if one discusses climate change”

How much pest is the downpour of black oil in the Arctic?

“To the north of the 80’s latitude, I think black oil is the pest that causes the greatest melting so that if it were possible to stop the soiling caused by the burning of black oil, it would be the largest single action to reduce the warming of the Arctic.

Black oil is really just the mud that will be left when the oil has been cleaned. It needs to be warmed, but it forms a soot that lays over ice and snow and covers the surface, ”says Árni and explains that darker surfaces absorb more of the energy of the sun than white snow and ice, and thus the effects of climate change are multiplied.