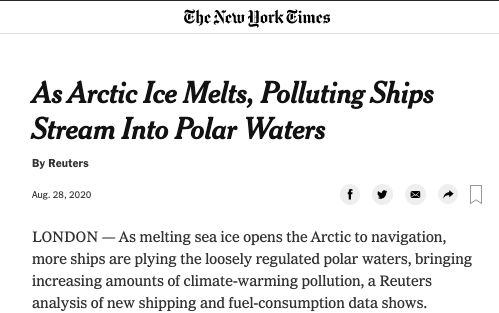 “The driving concern is the reduction of Arctic sea ice and the potential for more shipping,” said Sian Prior, lead adviser with the Clean Arctic Alliance. “We are already seeing that happen.”

The IMO is pushing for a full ban on both the use and carriage of heavy fuel oil through the Arctic by 2024. “The approach is to take action to mitigate any potential negative (environmental) impact,” an IMO spokeswoman told Reuters.

Environmentalists note, however, that the draft rules being negotiated by member states currently include a clause to exempt ships flagged to countries with Arctic coastlines while operating in those waters until 2029.

That exemption would end up applying to some of today’s most active Arctic shippers, including Russia and Canada. Such “big loopholes” would make the regulation “virtually meaningless”, said Prior, of the Clean Arctic Alliance.

“A significant amount – probably three-quarters or more – of the shipping currently using the Arctic will not need to apply the ban until July 1, 2029, if it remains as currently drafted,” Prior said.