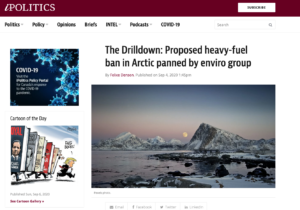 The International Maritime Organization (IMO)’s proposed ban on the transport of heavy fuel oils (HFOs) through Arctic waters contains so many “outrageous” waivers and exemptions, it might even create greater environmental risks for coastal communities, says the Clean Arctic Alliance, a global group of environmental organizations.

A report published this week by the International Council on Clean Transportation assessed how effective the potential ban would be. The report found that 74 per cent of ships fuelled by HFOs in the Arctic would have continued to use HFOs if the ban had been implemented in 2019. Moreover, a 16 mere per cent reduction in the use of HFOs in the Arctic would have resulted.

“Now it’s clear the IMO’s proposed ban on HFO use in the Arctic is a ban in name only,” said the Alliance’s lead adviser, Sian Prior.

“Only 20 per cent of the HFO used in the Canadian Arctic would be banned by 2024. That’s not a ban,” Andrew Dumbrille, a representative of the World Wildlife Fund Canada, a member of the alliance, wrote in an email to Nunatsiaq News.