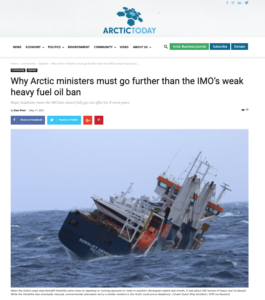 By Sian Prior, lead advisor to the Clean Arctic Alliance.

“The Arctic Council Ministerial provides a unique opportunity for foreign ministers to demonstrate global leadership by committing to rapid, Arctic-wide elimination of heavy fuel oil, and to immediate reduction in black carbon emissions from shipping. These commitments can be enshrined in the 2021 Reykjavik Declaration, to be issued at the conclusion of the meeting.

Specifically, the Clean Arctic Alliance is calling on Ministers to:

Arctic foreign ministers can also show leadership at home, by banning HFO use and carriage in their own Arctic waters and requiring the use of cleaner fuels by nationally-flagged vessels. Norway is already leading the way, by extending an existing ban on HFO in the waters surrounding Svalbard, which will stop all HFO use and carriage in the area. If progress is to be made in dealing with the impact of shipping in the Arctic and protecting the remaining Arctic summer sea ice, ministers from Iceland, the U.S., Canada, Russia, Sweden, Finland, and the Kingdom of Denmark, must follow Norway’s example, and move faster and much more effectively than the IMO, by getting heavy fuel oil out of the Arctic now, rather than waiting another decade.”