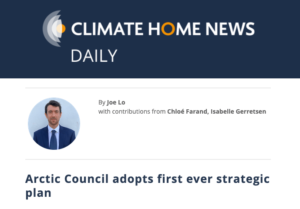 Climate was high on the agenda at the Arctic Council meeting this week. Ministers from eight Arctic nations, including Russia and the US, discussed growing concerns around black carbon pollution and agreed more action was needed to tackle methane emissions.

“Reducing emissions of black carbon and methane is particularly important,” US secretary of state Anthony Blinken said in his closing speech.

Blinken added the US would provide the council with up to a million dollars to support its climate and environmental protection work.

Campaigners welcomed the US’ commitment but expressed concerns the strategic plan did not highlight shipping’s contribution to pollution in the region.

“It’s excellent that [black carbon] has got so high on the political agenda in the US,” Sian Prior, lead advisor to the Clean Arctic Alliance, told Climate Home News. “In terms of shipping the news is not so good. Black carbon emissions have been going up by 85% between 2015-2019 in the Arctic.”

Prior said Russia’s role as the next chair of the council is concerning. Moscow has previously insisted on waivers and exemptions that would allow most ships to keep burning heavy fuel oil in the Arctic until 2029.

“At this point we’re optimistic. We need to keep the pressure up to make sure that having a two-year Russian chairmanship doesn’t stall progress,” said Prior.