Barents Observer/Eye on the Arctic: Shipping industry needs to do more to lessen underwater noise in Arctic, say NGOs 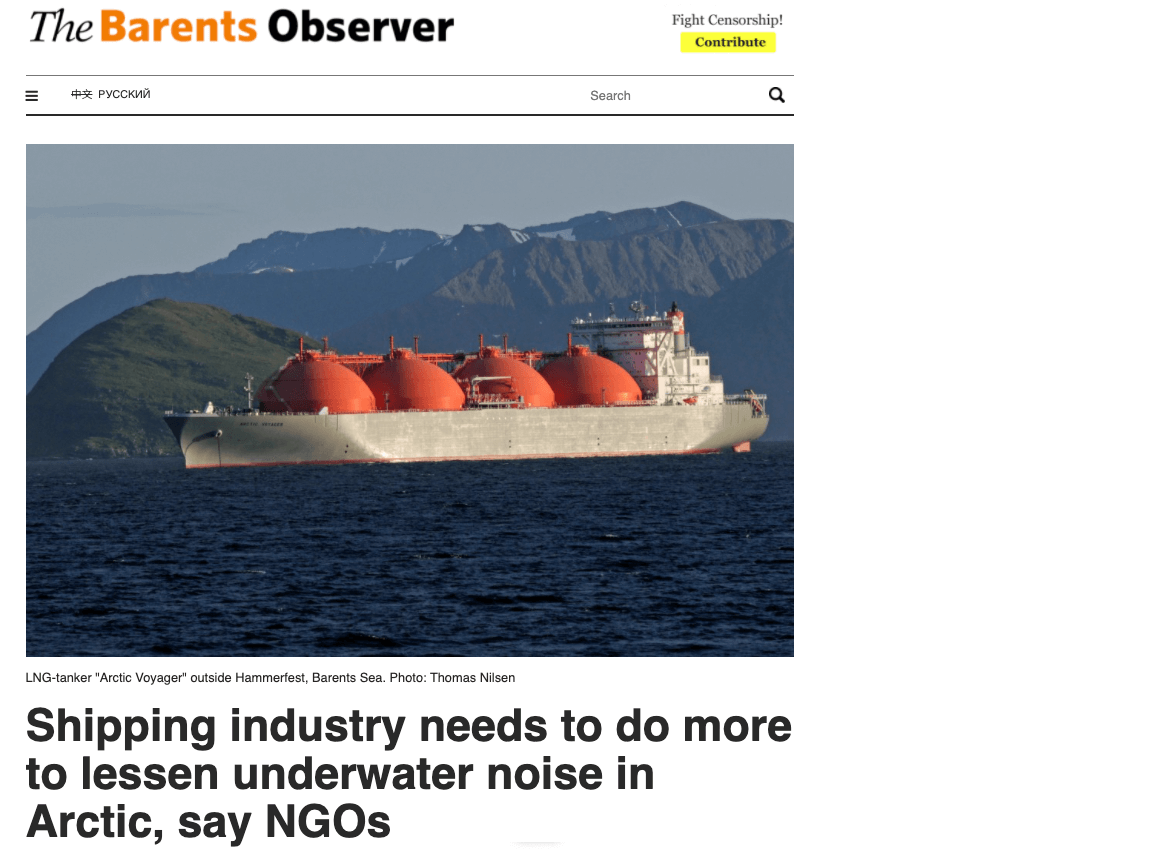 Published on Radio Canada International’s Eye on the Arctic and the Barents Observer, January 18, 2022, by Eilís Quinn.

As the International Maritime Organization (IMO) sub-committee meeting on ship design (SDC 8) and construction got underway this week, a group of international NGOs is calling for the maritime industry to do more to reduce underwater noise disturbances to marine life.

“The International Maritime Organization must act urgently to protect marine life by revising its guidelines for the reduction of underwater noise,” Sian Prior, lead advisor to the Clean Arctic Alliance, a coalition of 18 not-for-profit organizations, said in a news release on Monday.

“While the guidelines have been in place since 2014, their lack of uptake and overall failure to reduce underwater noise requires immediate attention. This includes actions that lead to shipping industry-wide measures that significantly reduce the impacts of underwater noise, such as reducing sailing speeds, and the use of equipment such as quieter propellers.”

Underwater noise caused by shipping has become an increased concern, particularly in the North, the NGOs say.

“Research from the Arctic Council has recently shown that Arctic underwater noise has significantly increased over the past few years,” Sarah Bobbe, Arctic program manager, at Ocean Conservancy, said.

“Ship traffic is also increasing in the Arctic, and given the unique special Arctic environment, underwater noise from ships has a much higher impact than in other parts of the global ocean.”

The IMO approved guidelines for reducing underwater noise caused by commercial shipping in 2014.

Propellers, hull form and on-board machinery were among the main causes of underwater noise.

But Clean Arctic Alliance said given the voluntary nature of the guidelines, there’s been little progress, and that worldwide regulations to mitigate underwater noise pollution need to be put in place.

Review of the IMO voluntary guidelines is one of the issues under discussion at his weeks’ ship design and construction subcommittee meeting.

“The workplan put in place at SDC 8 must be ambitious in scope and reflect the urgency needed to address underwater noise from ships as it continues to increase at alarming rates”, Bobbe said.

“Advancements in new technologies such as quieter propellers have already been developed and can be installed on new ships and retrofitted on existing ships when in drydock for repairs. There are also very simple ways to reduce noise, like slowing ships down. This will bring co-benefits of reduced fuel use and emissions.”