The Guardian: ‘Black carbon’ threat to Arctic as sea routes open up with global heating 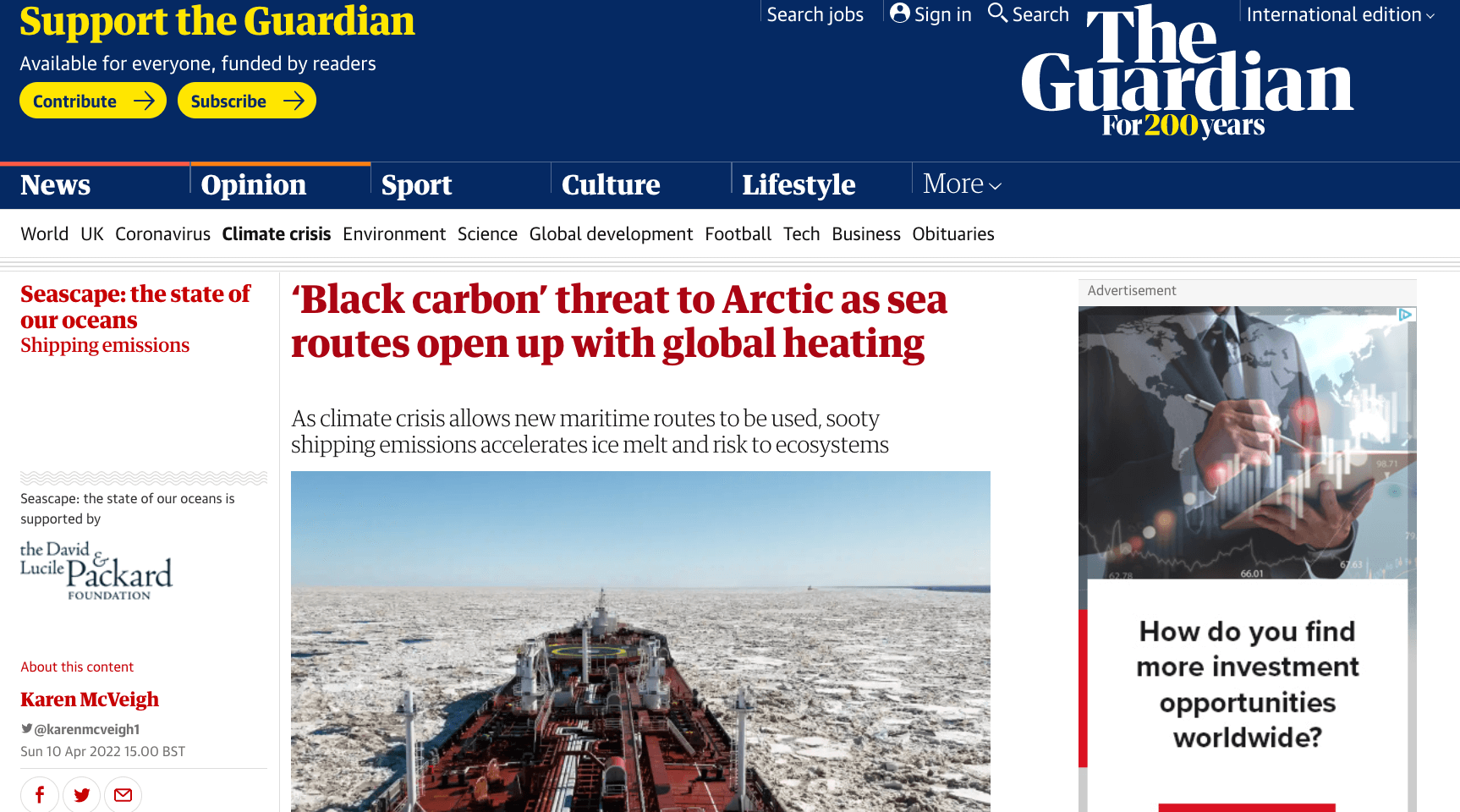 But Arctic shipping is not only made possible by the climate crisis, it is adding to it too. More ships mean a rise in exhaust fumes, which is accelerating ice melt in this sensitive region due to a complex phenomenon involving “black carbon”, an air pollutant formed by the incomplete combustion of fossil fuels.

Environmentalists warn that the Arctic, which is warming four times faster than the global average, has seen an 85% rise in black carbon from ships between 2015 and 2019, mainly because of the increase in oil tankers and bulk carriers.

The particles, which exacerbate respiratory and cardiovascular illness in towns, are short-term but potent climate agents: they represent more than 20% of carbon dioxide equivalent emissions from ships, according to one estimate.

We’re hitting this cascading tipping point for the climate … we need to do something about black carbon urgently – Dr Lucy Gilliam, Seas at Risk

Yet unlike other transport sectors, including road, rail and inland waterways, where air-quality standards curb emissions, no regulations exist for shipping. Last November, the International Maritime Organization (IMO) adopted a resolution on the use of cleaner fuels in the Arctic to reduce black carbon, but left it as a voluntary move.

Last week, the IMO was once again in the spotlight. A coalition of environmental groups warned a meeting of its pollution, prevention and response subcommittee that its resolution did too little to tackle the Arctic’s climate crisis. They submitted a paper calling on governments to agree mandatory regulations to slash shipping’s emissions of black carbon in the region.

“We’re hitting this cascading tipping point for the climate,” said Dr Lucy Gilliam, senior shipping policy officer of Seas at Risk. “With the IPCC report, we are seeing again why we need to do something about black carbon urgently.”

“IMO member states must agree on ambitious and urgent global action to dramatically reduce ship-source black carbon emissions this decade, in order to mitigate the climate crisis in the Arctic,” said Dr Sian Prior, lead adviser to the Clean Arctic Alliance, a coalition of 21 non-profit groups lobbying governments to protect Arctic wildlife and people. She urged states and regions to do their part by acting immediately to cut black carbon from ships.
If all shipping using heavy fuel oil in the Arctic switched to cleaner distillate fuel, it would cut their black carbon emissions by 44%, the Alliance said. Heavy fuel oil or bunker fuel is a viscous, low-grade, cheap oil contaminated with substances including nitrogen and sulphur, which make it more polluting than distillate.

If all ships also installed diesel particulate filters, which reduce emissions by capturing and storing soot, black carbon could be cut by a further 90%.