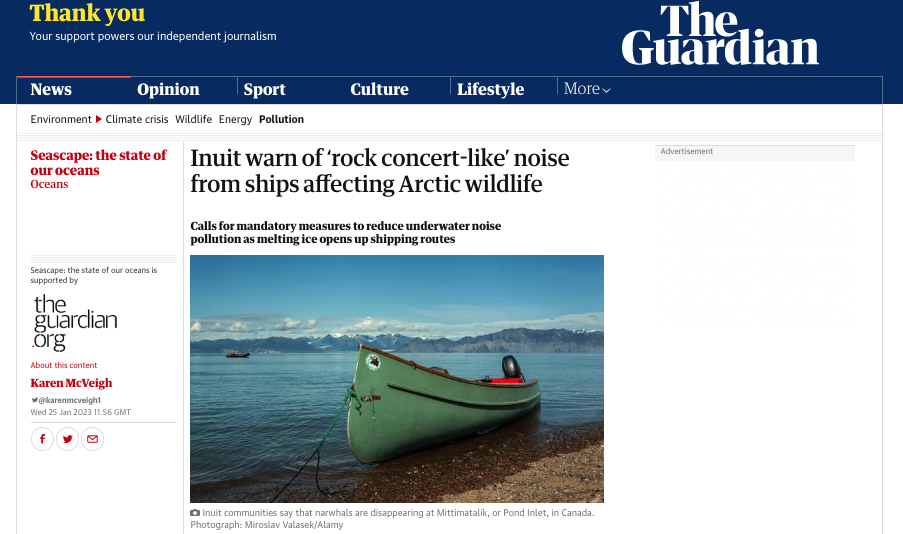 “The Inuit community on Mittimatalik has observed an increase in shipping and shipping noise, and harvesters are not seeing narwhals in their usual spots,” said Lisa Koperqualuk, president of the Inuit Circumpolar Council (ICC). “They have to go further away to hunt them, which carries risks, costs more in fuel and affects the transfer of cultural knowledge.”

Underwater ship noise is known to affect some species of whale, including narwhals and belugas, as well as fish such as Arctic cod, according to the Arctic Council, an international forum of the eight Arctic countries and six Arctic Indigenous groups, including the ICC.

In 2014, the IMO approved guidelines for reducing underwater noise from commercial shipping, and this week it is discussing whether to revise them at a London meeting on ship design. The Inuit body wants mandatory guidelines, while Canada proposes a working group specifically to look at noise.

The committee is also responsible for incorporating Indigenous knowledge into its work, enabling Inuit and Indigenous communities to engage in the process as well as exploring ways to increase uptake of the guidelines.

Inuit groups and other NGOs say the voluntary nature of the guidelines mean there has been little progress on underwater shipping noise reduction. A study by Transport Canada, the Chamber of Shipping of America and WWF Canada reported that a key barrier limiting uptake of the guidelines was their non-binding, non-regulatory nature.

Sarah Bobbe, Arctic program manager at Ocean Conservancy, urged the IMO to act. “In addition to global measures, even more stringent regional measures to reduce acoustic pollution from vessels in areas such as the Arctic will be necessary,” she said.

The Arctic is a special case, she said, because of the way in which sound propagates over long distances, how it can affect marine life and because the resulting effect on Inuit communities.